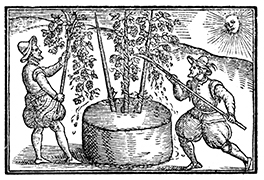 This exhibition of rare books reveals the rich and fascinating history of brewing. Commencing as a domestic craft primarily performed by women and changing to the scientifically measurable occupation which was commercialised and industrialised in the 18th century.

Rare Brews: from cottage to industry features brewing recipes dating back to the 16th century, including possibly the first known English beer recipe to contain hops. Peruse 17th century brewing guides and explore architectural plans for home breweries. You will also have an opportunity to see the first known English text on hop cultivation, and explore key scientific texts by Louis Pasteur and Emil Christian Hansen.

Can you use a recipe from the past to brew a beer today? Using old recipes from Rare Books you will discover the pleasures of rare brewing. Open to University of Sydney students, staff and Alumni – have some fun and learn about an ancient craft.


Join us at the awards night

University alumni Matthew Davis and Topher Boehm talk about the Rare Brews exhibition and their passion for brewing.

We acknowledge the tradition of custodianship and law of the Country on which the University of Sydney campuses stand. We pay our respects to those who have cared and continue to care for Country.